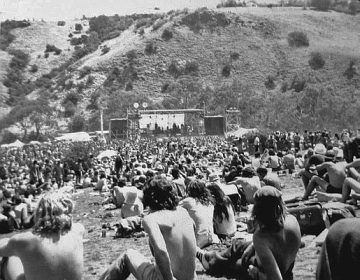 What do festivals of long ago have in common with the celebrations we know today? We still applaud harvests by sharing food. We still preserve culture with entertainment and community building. We still work to pass along our traditions to the next generation.

But the look of those festivals has changed.

With the exception of a few that still host fist fights, body skewering, voodoo, bone turning, dancing with corpses and staged funerals, festivals have developed into heart-warming events adored by the young and old.

In most cases, food, drink, music and live entertainment have replaced the macabre.

The original purpose is still celebrated, but the rituals relaxed…the business replaced with pleasure, if you will.

The Business of Running for the Gods

Picture it: Halfway between the time of harvest and the flooding of the Nile, an aged, gold-laden king is carried in as nobles, priests and the public look on. It is time to ensure that the gods wish for his reign to continue.

He enters the temple hall at Saqqara and runs ten laps around the inside of the space. He is then supplied with a bow and four arrows, firing one to the North, South, East and West. All of this is to confirm that he is still fit for service and has power over the land.

This would have been the scene at the Egyptian Sed Festival, which can be traced back to the 30th Century B.C. It was held thirty years after a king took the throne, then every three years, as well as whenever a king showed signs of physical decline. As with many festivals, the events were thought to reveal the wishes of the gods.

Australian Festivals, as Viewed Through Crinkles in Time

Australia is home to some of the largest and longest-running festivals. The Aboriginal people, authors of the world’s most enduring culture, are known for celebrating their way of life through song, dance and storytelling. They continue to celebrate their ancestry with current-day festivals like the Laura Dance Festival, which is the longest running festival celebrating Aboriginal culture through dance.

Other examples of longstanding festivals in Australia include the first Festival of Sails in 1844. An event hosting the Passage Race from Melbourne to Geelong. 175 years later, festivalgoers will wander the waterfront, enjoying food, wine and market stands whilst amused by roving entertainers and serenaded by live music that drifts through the salty sea air…with 3,000 sailors and 300 yachts racing on the shimmering horizon.

Fast forward 25 years later to Easter weekend 1871, a Gala Parade, with all its colours dancing, winds through the streets of Bendigo. After the sun sets, the darkness is dotted with golden orbs from the Torchlight Lantern Procession. A glimpse into the future reveals a modern-day Bendigo Easter Festival, streets swathed in colour—both in artistic talent and cultural diversity—in what will become Australia’s oldest community festival.

What if those festival forefathers could hear a sampling of today’s Australian music celebrations? Would their spirits take flight with traditional folk harmonies? Or would their souls be stirred with bass-laden, heart-pounding progressive rock? Would they marvel at the Sunbury Music Festival of the 70s, or the current-day Electric Gardens, Origin Fields Festival and Dark MOFO?

Certainly, they would wonder at the sheer size of Adelaide Fringe, its whimsical pop-up and roving entertainment; cabaret, comedy and physical theatre; music and dance performances; and digital and physical art of all types…marvels beyond their imaginations.

And their laughs might coil through crinkles in time when they observe the pure hilarity of the Melbourne International Comedy Festival, with cabaret, stand-up and improv on a scale that was, until now, utterly inconceivable.

The founders of the first festivals would surely be delighted at our current festival landscape. And likewise, if we could see into the future, we would certainly be surprised at what they will become.

The potential is limited only by the human imagination, which we all know, is virtually limitless.

Festivals are History, Business and Pleasure

Festivals are history, but they’re not going anywhere! They are demonstrations of what places hold dear, and all the things they want future generations to cherish. Only you can help to keep festivals, and their history, alive.

Surely, what people find entertaining has changed; what hasn’t changed is the fact that if you entertain them, they will come.

How do we do it? Bamboozled Productions curate festivals in alignment with tradition, or to challenge tradition…whatever suits your objectives. We build gorgeous tents, present bold events and surprise audiences again and again with brilliant demonstrations of skill and production. And we do it all in honour of the rich festival history we’ve all come to treasure.