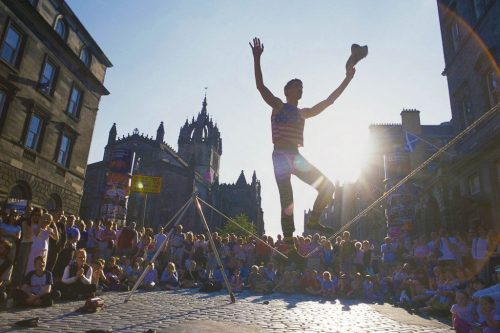 Art, by definition, is an expression of creativity. And creativity? That’s the manifestation of imagination and original ideas.

Most often, both happen on the fringes of what’s considered mainstream.

The birth of Fringe is a superb example of how true artistic expression happens outside the conventional.

The Birth and Growth of Fringe

It was 1947. Europe was recovering from World War II. A juried cultural celebration was taking place In Edinburgh when eight uninvited theatre companies arrived. There were no spots for them, of course, so they set up outside the perimeter of the festival. Yes, on the fringe. And just like that, Fringe was born.

In the 1950s, although still centred in Edinburgh, Fringe was formally organised to handle the logistics of its increasing popularity. It continued to grow until it spread to North America, where Edmonton, Alberta would host its first Fringe festival in the 1980s. Today, more than 250 Fringe festivals are held annually, around the world.

Adelaide Fringe is the second largest Fringe festival in the world, surpassed in size only by the original, longest running Edinburgh Fringe. Adelaide Fringe is home to more than 7000 acts, 1300 events…and four of Bamboozled’s tents can be found there.

In the Garden of Unearthly Delights, festivalgoers will discover an enormous line-up of 15-minute, bite-sized shows in the Little Palais and Rastelli tents. And in Gluttony, they will find a variety of spectacular shows within the beautifully bright tents known as Ukiyo and The Parlour.

The Little Palais will then head off to Mount Gambier where they are holding their second Fringe ever.

At Stirling Fringe, produced and sponsored by Bamboozled Productions, shows will be presented in The Pocket (a vibrant Bamboozled tent that will also appear at the Summer Garden Festival the first weekend of Fringe), as well as in the Stirling Community Theatre for the very first time. In 2019, Bamboozled took away the BankSA Adelaide Fringe Weekly Award, Best Event 2019, for Stirling Fringe. This year’s full programme can be found at www.stirlingfringe.com.au.

Fringe continues its rich tradition of independent artistry that brings people together. It gives artists a stage on which to challenge themselves and make connections that will keep them working ‘on the fringe’…staying progressive and innovative. Plus, it facilitates and encourages young artists while bringing the biggest players to the masses.

Last year’s Adelaide Fringe welcomed 35,000 visitors, which was up 72% from the previous year. Australians and visitors alike are falling in love with Fringe, and forecasts indicate big love for this year’s event, too.

Adelaide Fringe will commence on 14th February, and tickets can be booked through Fringe Tix. If you have not experienced Bamboozled’s Tents, we invite you to contact Louise or Nigel to arrange a personal viewing at Fringe. These tents are not just for Fringe festivals—they are for hire throughout the year, and might be just the thing your upcoming event needs.