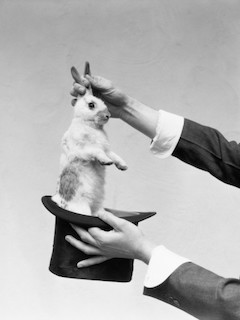 Is Magic More Than an Illusion?

Why the Infatuation with Magic?

Prior to the 19th Century, magic was not used for entertainment, but for trickery. The old “cups and ball” trick was used to swindle money from audience members, while card tricks were developed to cheat opponents during gambling and card games.

Fast forward to the 1800s, when magicians were just coming into widespread popularity. Their performances were less about scamming the public, and more about entertainment…and gaining notoriety when word spread about magicians’ so-called paranormal powers. In fact, illusionists were often accused of being witches (and subjected to the same fate).

Today, we know we’re being deceived when we watch a magic act. And yet, we willingly participate. We know we may not be able to explain how the illusion was completed, and yet, we go along with it, allowing ourselves to be fully engrossed in the performance.

We are enthralled. But why?

There is a psychological explanation, but before we get into that, let’s take a short walk through history, to see how magic has evolved with the help of some ingenious, ground-breaking illusionists.

The Greatest Magicians (and Magic Acts) of All Time

The evolution of magic over the past century is remarkable. As technology advances, so do the scale and difficulty of the illusions. As audiences grow in their willingness to be deceived, so do the complexity of magician’s achievements.

The late 19th Century saw London’s David Devant create and perform many of the familiar acts of stage illusion we know today. He was a great believer in mastery over magnitude, and therefore was in total, collected control for every platform magic performance. This was in stark contrast to Harry Houdini’s brand of magic, in which he demonstrated how he could escape nearly any type of entrapment under some of the worst circumstances. His entertainment value came in the form of suspense, when he would appear in the audience whilst onlookers thought he was still under water, buried or trapped.

France gave us two pillars of magic history in Robert Houdin and Alexander Herrmann. Houdin was known as the “Father of Modern Magic.” He used his skills as a watchmaker to devise a number of popular illusions…and was even accused of witchcraft when he caused an orange tree to blossom in front of a live audience. Herrmann performed acts of illusion, sleight of hand, card tricks and elaborate stunts like catching a bullet shot from a gun in his teeth. He is believed to be the first magician to pull a rabbit from a hat.

Next on the scene were two Americans, Harry Kellar and Harry Blackstone, Sr. Kellar was known as the “Dean of American Magicians,” with his most famous act being levitation of a young girl. He would also ask to borrow rings from audience members, shoot the rings from a gun at a locked box, open the box to find a smaller box inside, which contained each ring tied with a ribbon to a flower. “The Great Blackstone” might be most famous for devising the “sawing a woman in half” trick (which P.C. Sorcar recreated on television in the 1950s, causing people to call the station and ask if she was alright). But we can’t forget about Blackstone’s world-renowned “floating lightbulb,” in which he would unscrew a light bulb from a lamp and watch it float through a hoop while the lamp levitated over the audience.

Dai Vernon has been called one of the greatest sleight-of-hand magicians of all time. He created card tricks that were known around the world, and trained many other magicians—earning him the title, “The Professor.” He even fooled Houdini with a card trick.

Not every magician throughout history was a success the first time around. Houdini, for instance, started out performing card tricks. The truth? He wasn’t all that good at it, so he switched to escapism. Another such example is American Carl Ballantine. “The Amazing Ballantine” was not as skilled as other magicians, and when he made one of his many mistakes, he cracked a joke about it to the audience. They laughed, he got an idea…and he created comedy-magic. He was Las Vegas’ first magician.

The 20th Century saw James Randi, a Canadian, perform great escape acts, like the time he got out of a straitjacket whilst suspended upside-down over Niagara Falls. He even crushed Houdini’s record by staying submerged in an underwater coffin for 104 minutes.

Starting in the 1990s, magic’s mind trickery was brought to the forefront by Derren Brown, a Brit who convinced audiences of his supernatural powers, including his mind-reading abilities. Like other magicians, he was simply using keen observation, the power of suggestion and other psychological methods…but nevertheless, magic was now about the mind, not just the eyes, on a very public level.

Contemporary magic has been developed by a number of magicians, including David Copperfield, Criss Angel and David Blaine. Many are familiar with Copperfield’s act in which he caused the Statue of Liberty to disappear, and his walking straight through the Great Wall of China…but few realize that he holds 21 Emmy Awards, 11 Guinness World Records, and has been named “Magician of the Century.” Criss Angel is renowned for his street magic, card tricks, and stunts like doves appearing from his hands, levitation and causing objects to disappear. International Magicians Society has named him “Magician of the Year” five times, “Magician of the Decade,” and “Magician of the Century.” David Blaine has made a name for himself with dangerous feats of endurance. He was buried alive under a three-tonne water tank with no food for seven days. He was sealed in a large block of ice for more than 63 hours (rendering him unable to walk for a month). He even stood atop a 100-foot-tall, 22-inch-wide pillar for 35 hours.

Of course, these are the not the only magicians who have shaped the world of magic as we know it, but they are some of the more famous ones.

Which brings us back to the question:

Why are we still so enthralled by these feats of daring and trickery? Why doesn’t this get old? For the answer, we turn to science.

We are no longer being duped into believing that magic acts are the manifestations of paranormal powers or supernatural influences. We know that we’re being fooled with sleight of hand and masterful illusions. We know that our perceptions are being manipulated. We understand that our attention is being diverted so that we can be misled. And we continue to willingly fall for it. In fact, we often pay money to be fooled.

When we were babies, our brains were engrossed by that which we could not explain. We craved it, in fact. When someone left the room and reappeared, or when they played peek-a-book with us, our minds tried to reconcile something that didn’t seem possible, and we were entertained. Our obsession with these types of things is necessary to learning, because if we weren’t fascinated by what we don’t understand, then we would have no motivation to expand our minds. Magic plays into this inherent compulsion.

There’s another piece to the attraction of magic. Believing in magic assigns an explanation to those things we cannot explain. There is security in knowing there are things we do not understand (and never will). We have “figured it out” without having to figure it out. When we believe in magic, we relieve ourselves of expectations, and lay them on the magician, the illusionist…or even the existence of magic in general.

If we stop believing in magic, then the world loses its wonder.

You can continue to believe in magic—and keep the magic alive—by Liking and Following Bamboozled Productions on Facebook and Instagram, learning more about our talented musicians and entertainers, and by getting in touch with Bamboozled Productions to make your next festival or event simply magical…and more than an illusion.